In the 2016 provincial election, door knocks, phone calls, and lawn signs are not enough. Election campaigns increasingly require candidates to be savvy with hashtags, retweets and likes. Total social media usage among candidates leading up to the 2016 Manitoba Election has doubled when compared to the 2011 election. The greatest increase is in the use of candidate Youtube videos, which has more than quadrupled. Open Democracy Manitoba (ODM), the organization behind the ManitobaElection.ca voter resource, noted the increase while collecting candidate social media accounts for display on its website. 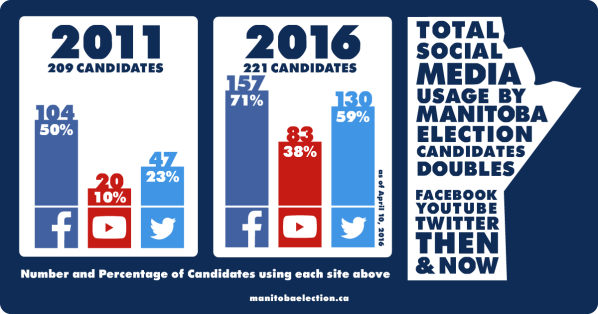 “The candidate profiles on ManitobaElection.ca feature links to election websites, Facebook, YouTube, and Twitter accounts” said ODM cofounder Kyle Geske. “We’ve been talking about what other social media tools we’ll need to prepare for in future elections. Some candidates are using Instagram, LinkedIn and other tools. It’s really picking up and it appears candidates get a lot of exposure this way.”

The group also found more online content in general for this election. They’ve discovered 41 election related websites set up by various organizations to promote specific election issues. As in 2011, the ManitobaElection.ca website links to news articles that mention any of the 2016 candidates. They are currently linking to more than 1,900 articles from online news sources from across the province.

The folks at Open Democracy Manitoba want to help you make an informed choice on April 19th. The 2016 version of their ManitobaElection.ca website is a comprehensive voter resource for our provincial election.

The site features constituency maps, a calendar of election-related events, recordings of election debates, maps of past election results, and educational resources on legislative politics in Manitoba. Election candidates are listed along with links to their web pages, email addresses and social media accounts. News articles that mention candidates are also linked, providing up-to-date election news from a variety of media sources.

ManitobaElection.ca was built by Kyle Geske, Andrew Burton and Ken Harasym with the goal of increasing community interest in democracy. They maintain a similar website for City of Winnipeg municipal elections, WinnipegElection.ca. Over the past 5 years the election websites run by Open Democracy Manitoba have accumulated a million page-views from over two hundred thousand users.

“Voters from all over Manitoba are visiting ManitobaElection.ca to inform their vote”, says Geske. “We’ve got everything they need to prepare for the upcoming election – all in one place.”

So what’s a voter to do? Here’s your Manitoba Election checklist:

With less than a week to go before the 2011 Manitoba provincial election, the team behind Open Democracy Manitoba is busy putting the finishing touches on their citizen-created election resource. Their ManitobaElection.ca website is already a clearing-house for candidate information, but it is growing into something bigger.

“This all started with our own frustrations about not being able to find unbiased election information online” says Kyle Geske, one of the site’s founding members. “Our goal is to build an approachable, well-organized resource for voters. This includes gathering information about the candidates, but it also means educating voters on the election process and on politics in Manitoba” adds co-founder Jody Gillis.

Since the site launched, the members of Open Democracy Manitoba have been fielding questions about elections and the political process from family and friends. To answers those questions they added a voter education section to their site. Written in plain English, the material explains everything from the roles of elected officials to how constituency boundaries are created. This new feature caught the eye of a number of educators and students.

“Our most recent feature is an interactive map that visualizes the Manitoba election results from 1958 to 2007” say Andrew Burton, another team member. “We’ve added an issue page that links to a comprehensive array of election related organizations, each trying to promote their individual issues. We also just finished posting all the candidate questionnaire responses we received back from candidates.”

The website is currently attracting thousands of hits each day from all over Manitoba. The Open Democracy Manitoba team is using this traffic as an opportunity to communicate important notices to voters, such as the change in electoral boundaries since the 2007 election. They want to remind all voters to double-check their constituency since the majority of boundaries have changed since the last election.

The folks at Open Democracy Manitoba want to help you make an informed choice as a voter on October 4th. Their new election website aims to be a comprehensive resource for information on the upcoming provincial election.

The Open Democracy Manitoba community organization was founded by Winnipeggers Kyle Geske and Jody Gillis. In 2010 Geske and Gillis, instructors at Red River College, built a similar site for the Winnipeg civic election.

“The response to WinnipegElection.ca exceeded our expectations,” says Gillis. “By election day our site had been visited by over forty-five thousand Winnipeggers.”

“We’ve raised our expectations for ManitobaElection.ca”, adds Geske. “We want to engage voters and empower them to learn about the candidates, the issues, and the legislative process itself.”

Now that the election has officially been called, the group is working on adding historic election data to the site. They are also preparing a candidate questionnaire, which will be sent to all the candidates once nominations close on September 13th.